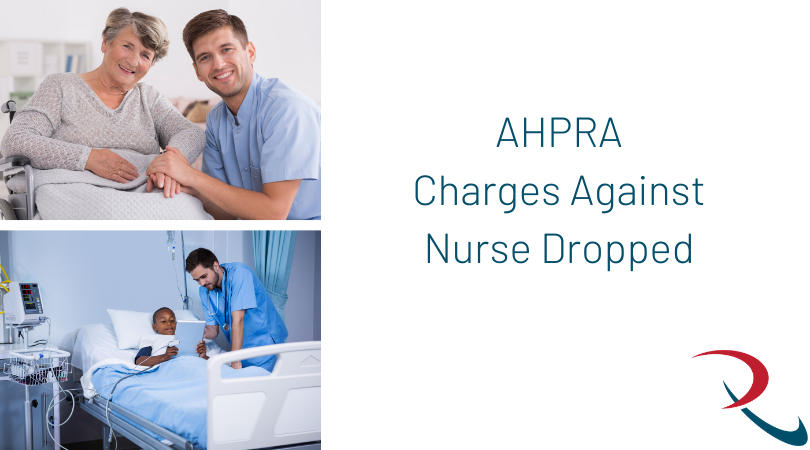 Last week RK Law was extremely proud to defend a claim by AHPRA against an experienced Nurse to revoke their nursing registration. We received a great outcome for a client who was wrongfully accused of misconduct as a Nurse in a facility.

When the complaint was received, the outlook appeared grim for the Nurse. There were several Stat. Decs. from key management staff in the organisation supporting the allegations. A number of times the Nurse asked whether it was worth pursuing, and even recently if it was worth re-applying for Registration for the 2020/21 registration year.

After leaving the facility, the Nurse was re-employed in a very high paying job in another location. The complaint to the Regulation Agency was used against the Nurse to terminate subsequent high paying job. It was also a further barrier to obtaining other employment in the industry as the Nurse had to declare the pending case to prospective employers.

This meant the Nurse had to live and work in another State from the Nurse’s partner, as it was impossible to obtain work locally due to the stigma of “stealing medication from a dead patient”. At or about the same time, the Nurse’s partner had a deterioration in their health, causing them to retire from work – affecting cash-flow and the ability to pay for legal services.

It was clear when taking instructions that the Nurse had no idea about the allegations. We organised the Nurse to provide independent records such as telephone records and bank transactions. From this, we were able to defend the Nurse in the lengthy proceedings.

It was also a case where we felt so passionate about the injustice, that Principal Lawyer, Rowan King took the case on Pro Bono putting in most of the man-hours outside of core work hours – due to the poor financial position of the Nurse – and the inability to fund the matter with the declining health of the Nurse’s partner.

The Nurse retained RK Law, who successfully defended the allegations and received not only a dismissal of the allegations but justice after a 2 year battle with a disgruntled former employer. The Nursing industry is better having this practitioner (with over 35 years experience) back in the field.

Below is a summary of the matter:

If you have received a complaint from a regulation authority, you must contact RK Law immediately!